Do you want to know exactly how many grams are in an ounce of weed and why you often see different numbers? Look no further…

⚖️ How Many Grams in an Ounce of Weed?

However, for simplicity’s sake, quantities are almost always rounded down. So in the case of an ounce, one ounce of weed equals 28 grams.

🤑 And, if you ever decide to purchase cannabis product in quantity, these are important numbers to be in the know, because the more weed you buy, the more you’ll save!

For casual smokers, though, an eighth of weed (⅛ of an ounce or 3.54369 grams) is the perfect go-to amount of product due to affordability and convenience. ⚖️

An eighth is actually quite a lot of weed too. For example, a “mere” eighth of weed can be rolled into about 7 half-gram joints or packed into 14 quarter-gram bowls.

That being said, an ounce is, therefore, a whopping eight-eighths of weed, so it’s a considerable amount of cannabis for the money. For heavy smokers, you simply can’t beat it.

⚖️ How Many Grams in a Half Ounce of Weed?

⚖️ How Many Grams in a Quarter of Weed?

⚖️ How Many Grams in an Eighth of Weed?

An eighth of weed or 1/8th of an ounce, is the most common amount of weed purchased by consumers.

Though, half-eighths or 1/16th of an ounce amounts are now very popular thanks to legalization in many states and consumer demand.

Use the handy weed weight conversion table below to quickly determine how many grams in an ounce and more.

🤔 Why Do We Use Both the US Standard and Metric System?

This simply has to do with the fact that there are two main systems of measurement used in the world: the Metric (or decimal) system and the US standard (or Imperial/American) system.

How do the US standard (or Imperial/American) system and the Metric (or decimal) system differ?

🔎 The Metric (or Decimal) System:

This unit of measurement also makes more sense than the US standard system, the latter which most find very confusing, which we’ll be briefing on in the next section.

The Metric system is simply made of units based on powers of 10 (exponential) and you can easily convert units just by moving the decimal point.

Also, the beginning part of the word describes the size of any given unit (e.g. centi, milli, kilo, etc.). For example, one kilogram equals 1,000 grams where one megagram equals 1,000,000 grams.

🔎 The US Standard (or Imperial/American) System:

The US Standard (or Imperial/American) system, on the other hand, uses units that literally have no predictable relationship to each other. Wait, what?!

Yes, that’s probably why most of the world find it complicated and impractical. Living overseas has forced me to dive into the world of the Metric system and I can now see why this is true.

For example, there are 16 ounces in one pound but 2000 pounds in one ton. There are also 4 quarts in a gallon yet only 2 cups in a pint. Talk about confusing!

For example, depending on the relationship between any two given units, you will need to divide or multiply amounts, which unfortunately, don’t always make sense.

🙋 Why Should I Even Care Which Measurement is Used?

There are quite a number of reasons why it’s important to know about the different measuring systems used to weigh weed, or weigh anything for that matter.

Knowing each system is super useful in the real world, especially if you live in the USA and ever travel abroad. Remember, nearly the entire world uses the Metric system.

So, it doesn’t matter whether you are a consumer, grower, or budtender working at a dispensary.

Here are more reasons to know each system… 👇

🔎 As a cannabis consumer…

🔎 As a cannabis production worker…

For any of you who end up working in the production sector of the industry, knowing the metric system will be imperative because of its widespread use and simplicity.

For example, kilograms is a common measurement used in the production environment, even though weed is often sold using the US standard/Imperial system once it leaves production for sale in cannabis dispensaries across the country.

Either way, you will want (and need) to know both.

🔎 As a cannabis sales associate…

And if you end up working in the sales sector of the industry at say a medical dispensary, you’ll definitely have consumers asking for product using both systems of measurement.

Consumers will also be looking for advice from an expert, and being that you are “supposed” to be that expert, knowing your weed measurements is important so you don’t look like a fool.

Ego’s sake aside, it’s also critically important to know your measurements because selling the wrong amount of flower to a consumer might just put them over the legal carry/purchase limit.

When I started my cannabis brand CannaRecruiter.com, I used to (for fun) quiz budtenders when buying cannabis and I was amazed just how many didn’t even know their weed weight conversions.

❓ What Are Some Ways to Weigh Weed?

Now that you know your weed weight measurements and can easily convert ounces to grams, etc., let’s take a look at the most common ways to measure cannabis flower.

⚖️ Use a Digital Weed Scale

This is the most accurate method to weigh weed, period. Of course, not all scales are equal and the best digital weed scales can cost some coin.

That said, if you are working with cannabis in any professional capacity whatsoever, there are no exceptions here when it comes to measuring product. An accurate and quality scale is a must.

For example, selling a consumer more weed than the legal purchase/carry limits can create huge legal ramifications. You may be fired from your job and the dispensary you work for may even be fined an exuberant amount, if say, your customer gets rolled by the po po’s. 👮

Most cannabis dispensaries will spend more money on a quality digital weed scale to ensure accurate measurements, and because a dispensary scale will be put through continuous day-to-day use, quality is more important.

Though, if you are a consumer, a scale can help ensure you aren’t getting ripped off on a purchase. Plus, if you happen to sell amongst your buds (pun intended 😉), you’ll save some money by not overselling.

The above weed scale recommendations are for consumer and prosumer folks, and due to demand, you can purchase a decent weed scale for as low as $10. Not bad! 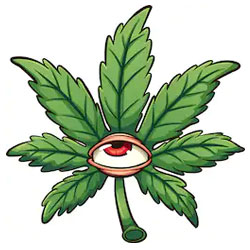 Weighing weed by eyeballing it technically isn’t weighing weed, but you’d be surprised just how accurate some professional cannabis users can estimate product quantity just by looking at some nugs.

Of course, most of these users have been around cannabis for many years and many have grown and sold weed whether on the black market or the legal scene.

However, you can too train yourself to estimate weed by eyeballing it. It will of course take some time and exposure to various quantities of cannabis for you to get good at it.

The most significant pros here are that you won’t have to invest in a scale or carry one around, however, with prices being so low for a weed scale, it doesn’t hurt to pick one up to have on hand.

That being said, eyeballing it isn’t exactly super accurate, even with the eyes of experienced folks. Different varieties of weed have different characteristics such as fluffiness, density, etc.

📏 Use a Ruler and Penny Scale 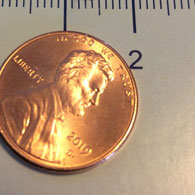 Many people simply use a ruler and a penny to weigh their weed. I personally find this method quirky (I’d rather just buy a cheap weed scale) but it works and is more accurate than eyeballing it.

For example, a penny (since 1983) weighs exactly 2.5 grams. What you do is basically just center a ruler across a pencil (directly in the middle), place a penny on one end and load up weed on the other end.

Here’s how to make a ruler and penny weed scale…

Step 1: Get a ruler, penny (after 1983), pencil, and some fresh weed
Step 2: Place the pencil on a flat surface and place the ruler exactly in the center
Step 3: Place a penny on the far end of the ruler
Step 4: Load up some weed on the other end

It doesn’t get much easier than this. Unless of course you have a scale!  If you don’t have a scale and want to weigh some weed with decent accuracy, this method is pretty cool.

TIP: Your finished ruler and penny weed scale will look like one of those teeter totter things you used to play on as a kid!

📱 Use a Smartphone Scale App 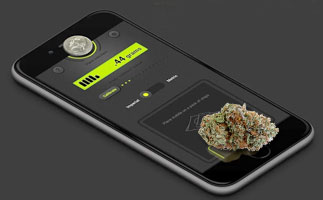 There is seemingly an app for anything, and sure enough, there are digital scale apps.

Personally, I haven’t found a single one that gave me accurate results on par with even a cheap scale.

In my opinion, you’re better off buying a $10 digital scale or even making a ruler and penny scale.

That being said, I imagine a smartphone will in time more accurately weigh smaller items on par with the accuracy of some digital scales.

But until then, I’d opt for a more accurate method, or if you must, a combination of eyeballing and a smartphone app might do. Up to you!

How Many Grams in an Ounce of Weed: Wrapping it Up! 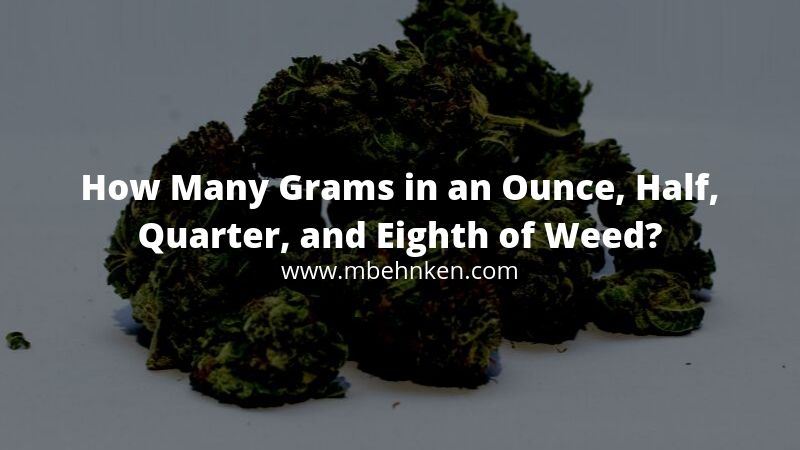 I really hope you enjoyed my weed measuring guide… I didn’t bore you, did I? 😁

It’s a win in my book if you got anything out of this. At least now you know exactly how many grams are in an ounce of weed.

Heck, maybe you even learned more than you ever wanted to know about measuring weed. But, at least now if anyone ever asks you how man grams are in an ounce, you’ll have an answer for them! 🤓